Dr Julian Saunders is an Australian climber and Osteopath, specialising in climbing injuries. He combines these rare attributes to explain a few misnomers about finger taping. Julian is currently in abstencia, playing and working in Christchurch, NZ.

Finger injuries are perhaps the most common amongst climbers. [Certainly upper limb injuries would constitute around 80% of all injuries]. Of these, the vast majority involve damage to what is called the pullie apparatus. This is a series of 5 slips of tissue, known as pullies, and are coded A1-A5. These are distributed along the length of you finger, A1 being just inside the palm and A5 at the end. They hold the tendon close to the bone and allow closure of your fingers without the tendons ‘bowstringing’ across the front. These are extremely strong in monkeys because, in there current state of evolution, they are designed to climb. We, however, have evolved away from the trees. Either no one has noticed or we are in denial. 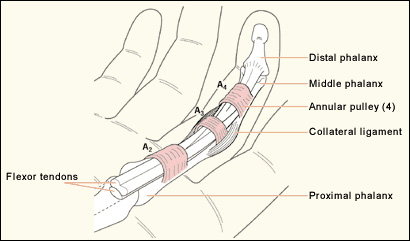 Although much stronger in climbers than sedentary individuals, the stresses placed on the apparatus are continually approaching the maximum possible load. Hence they regularly tear or snap. I have seen a few cases where A2, A3 and A4 have snapped simultaneously. Not a pretty noise and not a pretty sight.

A quick look around the gym, or Castle Hill if you are one of the lucky to frequent this most prestigious of bouldering destinations, will show a plethora of taped digits. Mostly it is like marginal gear, psychological only. It does, however, have the potential to be considerably more effective.

Lesson Number 1: tape is not made of collagen. Err der! Quite obvious really, but you would be stunned at the delusional capacity of an injured climber.

Taping to give strength to an injured pullie, and hence continuing to climb, is an exercise in futility. You might as well offer yourself to the God of Injuries and hurl yourself into the Volcano of Degeneration, for you will surely relinquish yourself to a progressively worsening condition. So before you hurl yourself over the precipice, ask for forgiveness for being so silly.

There are only two reasons to tape a finger: firstly, to limit potentially damaging finger motion; and secondly, to remind yourself that you have an injury. Don’t underestimate the latter as a rehabilitation tool. Tape accordingly!

Injury recovery is about letting an acute injury settle and stabilize, avoiding aggravating activity whilst it is healing, and then regaining the tissue’s original strength (plus more if the injury was a result of weakness rather than an abnormal shock load).

As per Lesson Number1, tape does not replace your pullies, nor does it supplement their strength. If you get the tape tight enough to do so, all you will end up with is a self-inflicted necrosing finger. I have seen the most intricate taping methods, ‘figure 8’ around the joint being probably the most popular. I even used to do it myself. Essentially these techniques are a waste of time, as they are attempting to unload the injured pullie system while maintaining range of movement. Done tight enough it may actually achieve this, and then your finger will turn a panorama of colours culminating in a lovely blue/black that will match the toe nail you stubbed last week. Like the toe nail, your finger may well fall off! 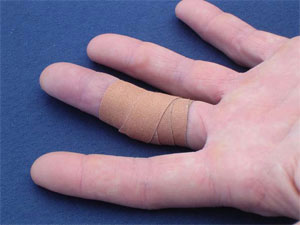 Figure 2. Taping the middle knuckle to reduce motion and protect A2 and A3 strains.

Realistically, taping can only be afforded in two of many possible climbing-related finger injuries. They are injuries to the A2 and A3 pullies. Having said that, it must be stressed that taping will not enable you to climb on an injured finger. It must first be given time to heal.

To be effective, correct taping of A2 and A3 pullies must result in restricting the ability of the finger to bend in the middle. To apply the correct technique, first note that there are three creases on the front of each finger, the first being at the bottom. With your finger straight, tape from half way between the first two and finish half way between the second and third, overlapping the tape 50%. You will quickly realize that your capacity to crimp is zero. Perfect. It will be great for your climbing.

This method works for both A2 and A3 injuries. If you cannot bend the middle joint (known as the proximal interphalangeal joint), the A3 pullie is directly protected. Climbing is such that, in most instances, if you cannot bend this joint then you will not bend the one below it, thereby indirectly protecting the A2 pullie. Even if the A3 is strapped, there are times when you can still functionally stress the A2, for instance pulling on a flat jug with the full length of your fingers. If your injury involves an A2 pullie, you should avoid doing this.

Lesson Number 2: recovery is a process. Consider pain as an index of the damage you are doing. If it is not painful, you are probably fine. And this includes during your warm up. Reduce the tightness of the tape slowly and progressively over a number of weeks depending on whether it hurts following each session.

Remember, this is a guide only. Without seeing your finger, I cannot say that you have an injured A2 or A3 pullie. Seek a medical opinion first.

Contact dermatitis is probably the most common. This is a local skin reaction in response to the adhesives used to make the tape stick. Typically, your skin becomes red and itchy. Cheap tapes use cheap adhesives and as such elicit a greater propensity to cause contact dermatitis. To avoid this use a high quality  tape only, such as brown Leuko.

If you are sensitive to tape then use a hypoallergenic underlay such as Fixomul. Be warned though, it is rather expensive. Better than having red swollen itchy pustulating bleeding fingers I guess. Nah, just kidding, they don’t get too red!

Tape will also slacken over a relatively short period of time. You will need to re-tape every hour or so as a general rule irrespective of whether the injury site is painful.

When you finish climbing be sure to wash off all the sticky stuff and apply a skin cream.

Lesson Number 3: physiological overload interspersed with rest generates strength; overload without rest causes degeneration. Not a difficult concept. All climbers will, however, be injured at some point. It is the nature of climbers that they try, at times, too hard, or things just don’t quite go according to plan.

Your injury has two enemies. The first is your ego, which will tell you that you too can look good doing 1-5-9 on the campus board just like Bla Bla. The second, ironically, is the same passion that drives you to go climbing in the first place: you wont want to back off and give the injury time to recover because you’re obsessed… like the rest of us. You get the idea.