The age-old art of bending yourself into positions never before realised sat at the citadel of conditioning theory. Now the news—apparently stretching ‘doesn’t do anything’! The citadel still stands but on shaky foundations; think the Leaning Tower of Pisa!

Stretching has been studied primarily on three levels—its effect on flexibility, performance, and prophylactic (prevent ative) influence on injury. There is an im mense and irrefutable amount of data demonstrating that a consistent stretching pro gramme will increase a joint’s range of motion. The obvious question: is in creased flexibility desirable? It would seem that it is and it isn’t, depending on the sport you play and your state of rigidity.

Next question: does stretching prior to exercise effect performance? The answer to this one is rather muddy. A systematic comparison of the data is difficult because the literature involves different sports, genders, methods, blah blah blah. In addition, most studies are of low quality and hence unreliable. That said, the majority proclaim stretching to be detrimental to performance for about an hour. Rel evance for climbers: you will have less grip strength if you stretch your forearms before climbing…probably! 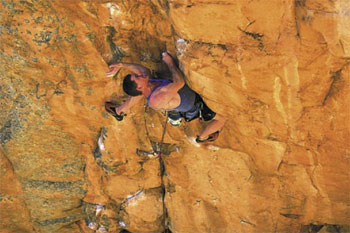 The little epidemiological evidence that exists on the effects of stretching addresses the question of injury prevention more clearly. Stretching has been a tenet of pre-exercise conditioning that, until recently, snuck through the net of scientific validation. It was assumed that a more flexible joint is better able to cope with duress. The current theory is that this flexibility allows the joint into more strenuous positions, resulting in subsequent soft-tissue carnage.

Back in the late 20th century, a very large study was conducted to establish ‘the truth’. We employed our army re cruits in the position for which they have been trained, as guinea-pigs, and they performed admirably. The results of that study – ‘stretching does not significantly alter the incidence of injury’—caused the avantgarde of coaching to choke on their whistles. Other research has since supported that finding. Stretching does not alter rates of injury whether it is done immediately prior to or immediately after exercise, or on a regular basis. Being more flexible than your fellow geriatric is actually not a good marker for injury avoidance and may even put you in a risk category as some research suggests that people at either end of the flexibility spectrum have a slightly higher propensity for injury.

All climbers are familiar with the muscular soreness you get following a weekend thrashing at Mt Arapiles or flailing at Nowra: that sweet, sweet pain. Every smarty-pants climber has their own ideas about training and recovery: just have a squiz at the plethora of opinions on the subject at every climbing forum. Now for that elusive ‘truth’ of the matter again. Does stretching after exercise alter the level of discomfort from what is known as ‘delayed onset muscular soreness’? Probably not. The jury is still hung due to the odd dissenter, but evidence so far points towards no.

I did hear someone with a rather polarised theory, along the lines of ‘don’t stretch your joints or they will become unstable’. Incorrect: flexibility does not equate to instability. For instance, a very flexible ankle does not mean you will sprain it regularly. That unfortunate propensity, like a dislocating shoulder, is greatly influenced by muscular control.

None of the studies I have seen address climbing, so take everything you read with a full salt-shaker. Too little is known to make evidence-based recommendations. My advice is that unless you are at the inflexible end of the continuum, stretching for hours is probably not time well spent. However, if you are stiff like a fossil, keep stretching; if you enjoy it, keep stretching; if you do it as part of a routine warm-up then keep stretching (go gentle on the forearms). There are other things you could drop from your warm-up that may have a greater effect on reducing the likelihood of an injury, such as ‘windmilling’ your arms, or (worse still) ‘windmilling’ each arm in an opposite direction. Whoever thought of this as a good warm-up must have been on Class A drugs. Another epiphany: don’t stretch when cold. Five minutes of easy traversing or a couple of juggy routes back to back will get your muscles warm first.

A warm-up that is thorough and related to the activity that follows is linked with better performance and fewer injuries. One study even showed that if you thought positively about your warmup, your performance was better! A good warm-up increases blood flow to muscles, the speed of nerve impulses, and oxygen and energy delivery. Your body assumes a state of preparation for the imminent activity; your metabolism winds up and intramuscular resistance decreases. This means increased mechanical efficiency, flexibility, and speed and force of muscle contraction.

Good general fitness and strength are the two most important things for preventing injuries. Go for a treadle on the bike, chase a black line up and down the pool, chase your kids around the backyard— whatever it takes. In my opinion, breathing chalk dust in your local bouldering gym is considerably more fun than pumping weights and will generate that much needed strength.