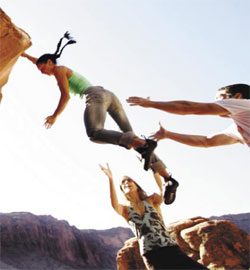 Highball atmospherics are the elixir of life. Once you start doing them, nothing else will quench your thirst in the same way. Like narcotics, great sex with someone you don’t like and pre-emptive strikes, this style of climbing is a hook with a barb—once you start, it’s diffi cult to stop. Up you go … and down you come. Not usually a problem, but there will be times when your feet get off-kilter and whoopsie … pop goes your ankle.

Although the knee may not be God’s greatest work, the ankle is his magnum opus, a brain tickling piece of anatomical engineering. Genius. Ironically, it is probably the most frequently injured joint. Climbers are more prone to fracturing their ankles than participants of many other sports. Aside from the obvious reason—bang!—it takes very little force to fracture an ankle when you are wearing a climbing shoe. Without a shoe, the bones in your ankle articulate to provide stability and motion, but also operate to disperse and absorb force. On goes the shoe and out goes most of this capacity. The bones become compressed and braced against each other. The forces are translated through the bones, rather than the tissues around them. A force that would otherwise barely register beyond a mild sprain now becomes bone fracturing.

For this reason, you are more likely to fracture a bone than rupture a ligament. Though not always, many breaks are accompanied by damage to the ligaments (the bands that hold your joints together). The vast majority of sprains associated with climbing are to the lateral part, that is, the outside surface. There are three large ligaments on this aspect. The lump on the outside of your ankle is the end of your fibula, the long, thin bone of your lower leg. Three ligaments join the fibula to the bones that comprise the back of your foot—the talus and the calcaneus. These ligaments are sostrong that rather than rupture, they can, and often do, rip the end of your fibula off. This is called an avulsion fracture. The general rule of the last decade was that if two of the three ligaments were ruptured, you were destined for the scalpel. Epidemiological studies have since shown little long term difference between those who had surgery and those who simply wore a bandage.

Now, only if you are a million-dollar sports jock do you get surgery to speed recovery. Otherwise, you are on the street long before your insurance company gets the opportunity to laugh at you. Here’s the deal (though it might sound incongruous)—the more it hurts (multiple breaks aside) the better the likely diagnosis. When a ligament is ruptured it typically makes a loud noise, and often doesn’t send you into eye rolling spasms of pain because the communication channels are also torn. A frayed ligament, however, retains the neural capacity to tell your brain you’ve screwed up. 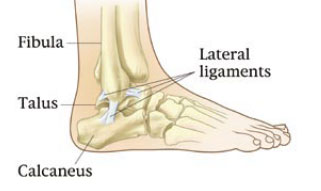 Contrary to popular belief, in many cases you can still move and weight a broken bone, especially in your ankle. Swelling is also not a good indicator of severity— a sprained ankle will often swell more. Last year, I broke my own ankle in three places snow boarding and had to walk for more than an hour down a steep New Zealand hill. Poor me. I felt like Joe Simpson. Another patient walked out from Taipan Wall, Australia—a mere 25-minute walk. Unfortunately he had two broken ankles. The point is this: do not assume your ankle is fine. Complex fractures may not be as painful as you would expect. Fractures in some bones, such as the talus, can have long-term complications. Due to the large load placed on this bone, a fracture may have difficulty healing, or it may heal in a fashion that will make osteoarthritis likely. Not cool. Being stoic is sooo yesterday.

People who don’t use spotters are very entertaining. Even more so if they use a bad spotter. You watch them sadistically without blinking—if they fall it will be a spill worth seeing. These people are also very good for business: a badly rolled ankle can cost $500 in physical therapy, not including cash for the surgeon who might stitch your ligaments back together and the anaesthetist who saves you from feeling it. Surely the biggest advantage of spotters is that they scream in your ear and refuse to accept you falling off. However, don’t underestimate the benefit of a spotter who keeps you upright, saving a perfectly good set of ankles, elbows and knees. A good spotter is a priceless addition to your bouldering kit.

A word on belaying: a soft belay will make your partner’s ankles very happy. The shorter the fall, the harder that is to achieve, and the more likely the climber’s feet will be jammed upward, damaging the front and back of your ankle. A softer belay reduces the force with which you hit the cliff.

Whether you are leading or bouldering, learn how to fall with some civility. Catapulting toward earth, stiff like a crow bar, will earn you many injuries and me a new investment property. The helicopter pantomime is also fraught with danger, not least of all for your spotter. Enough said.

For all other errors of judgement, I will leave you to lament your own foibles retrospectively. Whip yourself hard and furiously— you probably deserve it.

If it is an impact injury—get an xray! If you roll your ankle and are still concerned—get an x-ray. May your time at flight school be memorable for adrenalin induced euphoria, and not the snapping of tissues. Prevention is the most effective form of medicine. As for a waiver, yeah yeah, blah blah, go get a medical opinion.

If you don’t know this acronym you have been residing in the clouds of Jupiter. Rest. Ice. Compress. Elevate. Rest can be overrated at times—in this case it is not. A badly rolled ankle will need at least 2-3 weeks of nada. With regard to icing, there is no one protocol that has proven to be more effective. Longer periods of icing can cause tissue damage such as ice burn. I suggest using a bucket of ice water, as an ice pack warms and becomes ineffective very quickly. A lot of pain probably means you are chilling the nerves a little much and they’re pissed off—ice for a shorter period. Three sets of five minutes, with five-minute breaks, will be about all you can stand in ice water. Initially, do this a couple of times a day. Compression—wrap your foot and ankle with an ACE bandage. If your foot turns blue it is too tight! Couches are designed for foot elevation. So flick on your favorite series of iconoclastic TV, grab a tub of ice cream … and relax.

Get one. If it is still painful a week later, get more, or a different type of image. X-rays are not fail safe and fractures may not be visible. Talk to your doctor about some more funky (expensive) investigations, like a CT scan or an MRI.

Depends on the person as well as the injury. If it is a simple break (or not many ligaments) and the person is capable of protecting it, minimal bracing and crutches is the way to go. Extended immobilization can lead to months of therapy to regain normal range of motion and deal with tendonitis that often results once you use the ankle again.

If you are a chick, go to the next side bar. Guys, try to be intuitive. Choosing a time for your astounding comeback can be difficult, especially with all the corporate pressure. Listen to your body. Start gently and be progressive. If it is painful, back off.

Though a tad disagreeable on the ankle, tape will serve you well. ‘Stirrups,’ as they are known in both the medical and bondage circles, will prevent you from re-spraining your ankle while it is healing. Start the tape on the inside of your leg a few inches above the bony lump and take it down under your foot. At this point, lift your foot up and out (in the opposite direction you rolled it in the first place), and continue the tape up the other side to an equivalent height. Make two stirrups, overlapping 50%, then go around your leg to anchor the ends. A lack of taping ingenuity can be supplemented by using more tape! It is a good idea to tape your ankle for any activity in the first few weeks after the injury, especially bouldering. Shaving your ankle is a must, but why stop there? A little risqué perhaps, but my-oh-my, it certainly feels good.

A common problem. This is a local skin reaction to the adhesives used to make the tape stick. Typically, your skin becomes red and itchy. Cheap tapes use cheap adhesives and as such elicit a greater propensity towards contact dermatitis. To avoid this, use a high quality tape only. If you are sensitive to tape, use a hypoallergenic underlay.

Management is the key here, especially if you are as impatient as most climbers. Understanding when and what you can do is paramount to maximize recovery and minimize your grumpiness. Others will also appreciate this!

Assuming you are free of clunky casts and braces, start alternating ice and heat after a few days (five minutes of each, three times consecutively).

Manual therapy by a physical therapist, osteopath or the like, can help get the joint moving again and you back on the pebbles. A few welldirected stretches once the ankle has healed can help an enormous amount. Try sitting on your heel and rolling around on your foot. If you can’t feel it stretching, lift your knee off the ground until you feel the stretch.

If you suffer from chronic instability of your ankle (you are always rolling and spraining it), stability exercises will help. Unlike a plethora of other fads, yoga is the stalwart of trendy cross training. It even has it’s own fashion line. There are a few poses that are very effective for increasing ankle stability. Vrksasana, or, Tree Pose, for example, is an easy and effective balance posture. Stand on level ground with your feet together. Lift your right leg and hold your right ankle with your right hand. Place your right foot on the inside of your right thigh. The toes of the right foot face the floor. The heel should be close to the perineum. Bring your palms together. If the balance is stable, raise and extend the arms while keeping the palms sealed. To increase the difficulty, close your eyes. Hold for a minute or longer. To come out, lower the hands, take the ankle and return the foot to the floor. Repeat with the left foot raised.

My favorite ankle stability exercise is brushing your teeth, standing on one leg, with your eyes closed. Do some exercises even if it is the first time you have hurt your ankle, simply as a preventative measure. Using a wobble board, a disc with a half ball on the bottom, is also a good idea. Start by standing on the board with both feet. Carpet is easier than a hard surface. Graduate to balancing on the problem foot only. When this is no challenge, try it with your eyes closed counting backward from 10,000 by 17’s.

If you want to sit in a dark room and self-flagellate that is fine, but there are ways of keeping your body and head in a good place. One-legged bouldering in a gym is actually fun and can be very educational. Structured campus and fingerboard sessions are a great way of maintaining (and building) finger strength. If you have not done this before, be bloody careful. It is also a great way to blow your elbows to oblivion.